I first decided to ‘go paleo’ because I have an autoimmune disease – well, a couple, actually, is super crappy – and I read so many people in the same position had positive responses to the diet. Well, fortunately so did I, and I don’t intend ever going back to sugar, dairy or grains. However, to get fully into remission, I may need the extra nudge of a few months of AIP – autoimmune protocol – which is crazy strict and I am not looking forward to at all to be honest. So this Christmas, I shall be enjoying my last nuts, eggs etc. for a while and, although I’m aware it is counter-productive, I plan on eating enough to fully compensate for the forthcoming lack. 🙂

After spending a full year following the general paleo diet/lifestyle, I have a healthy collection of recipes. But true to form, I pretty much never follow any of them. A tweak here, a dash of something extra here….Urgh, it’s a sickness I tell you. I’m the same with a pattern or really any type of specific instruction. Not sure if that’s actually a sign of creativity or just passive aggressive rebellion…meh. Either way. 🙂

My favourite paleo chefs/cooks include Pete Evans, Diane Sanfilippo and Sarah Ballantyne. I also love Nom Nom Paleo, PaleOMG and Elana’s Pantry. I tend to read the recipes like a story, see how the parts make the whole, then go and experiment. So the following are not recipes as such, these are just my Christmas baking experiments this week, and I’ve included the links to what they’re roughly based on, if indeed they are based on anything at all.

These are YUM, easy to make, you just mix it up, form into logs and freeze, and when you’re ready to bake you just slice off rounds. Like normal cookie dough but without grains, dairy or sugar. I don’t why the picture on that website looks like it does, they look nothing like that. And you can’t really flatten frozen rounds with a fork? Anyhow, for Christmas I added extra nuts and lots of spices to these, nutmeg, cinnamon, allspice and cloves. I can’t describe how good they smell when they’re baking! 🙂

I make my own almond meal with a grinding blade in my blender. It works out a lot cheaper, and fresher too.

M asked me a while back to make Paleo Nutella….I figured it couldn’t be that hard? Roasted hazelnuts, coconut oil, cacao, maple syrup, salt, vanilla…..I experimented with those ingredients until it tasted right. I turned the hazelnuts into a smooth nut butter first before adding any other ingredients. I have a Kitchenaid food processor…a shiny red one cos obviously they go faster…..I have never actually ‘loved’ it like I thought I would, but I concede it does do a good nut butter. 🙂

So anyway, the first batch of Nutella got eaten. In two days. By me. So I actually didn’t make any more for a while after that because apparently I have absolutely no self control. But when it’s for Christmas I’m generally okay putting things away and not touching them, so I made another batch this week, then dipped them in 90 % cacao chocolate. I did eat two. They were awesome. 🙂 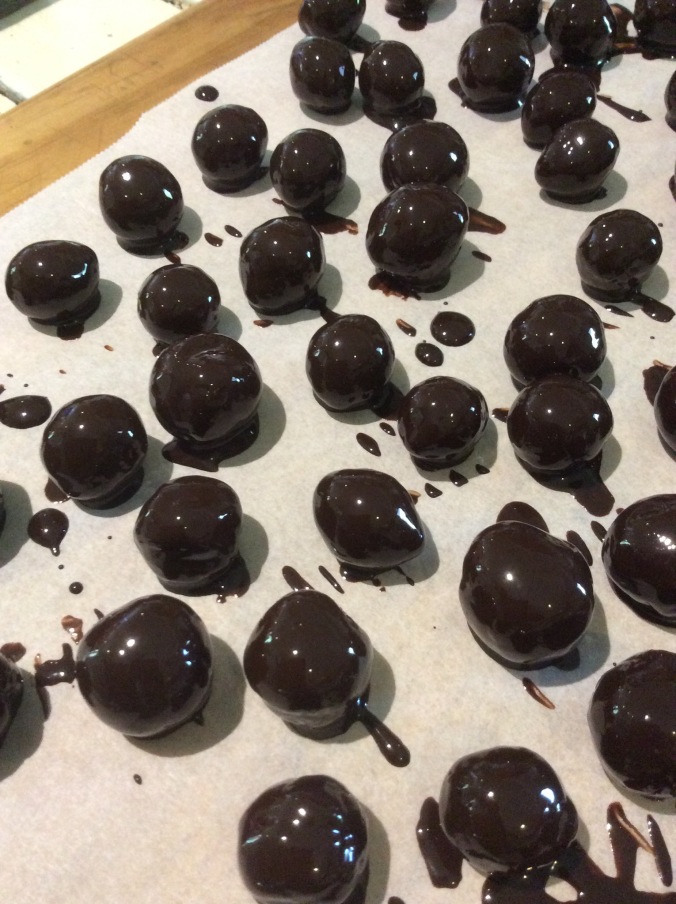 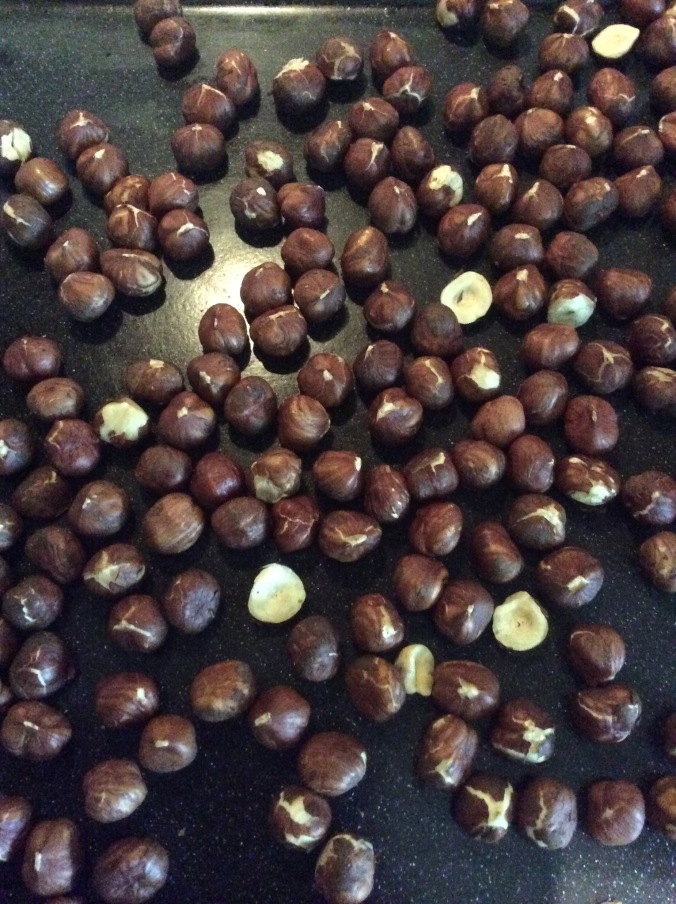 Then I did some date balls. I have found that equal amounts of dates and almonds processed in the food processor makes a handy mix that is a great base for truffles, and also a perfect ‘cheesecake’ base. And easy to remember the proportions too – 1:1. To make the balls, I start with the date/almond combination and add a touch of pink salt, cacao powder, a spoonful of coconut oil and some vanilla. But you could add anything, other dried fruits, liqueur, maple syrup, coconut, whatever. I rolled half in coconut flour and half in cacao powder.

Then on to a cake…..the frozen vegan raw cheesecake is a thing of beauty….there are recipes all over the internet for them, but the one that originally inspired me was this one.

Since then I have made stacks of these, and all of them different. Chocolate, vanilla, blueberry, mango, pumpkin spice swirl….they are so yum. Here’s an old one I did.

I don’t measure, I tend to just blend the general ingredients together and alter to taste. It’s basically a soaked cashew nut foundation, with added honey, coconut oil, vanilla and lemon juice (very important to give the cheesecake ‘tang’). You kind of get a feel for it after a while. If I’m short on mixture I will occasionally add some coconut cream to bulk it out. This Christmas I did and vanilla and chocolate spice one. Obviously can’t see much of it yet. 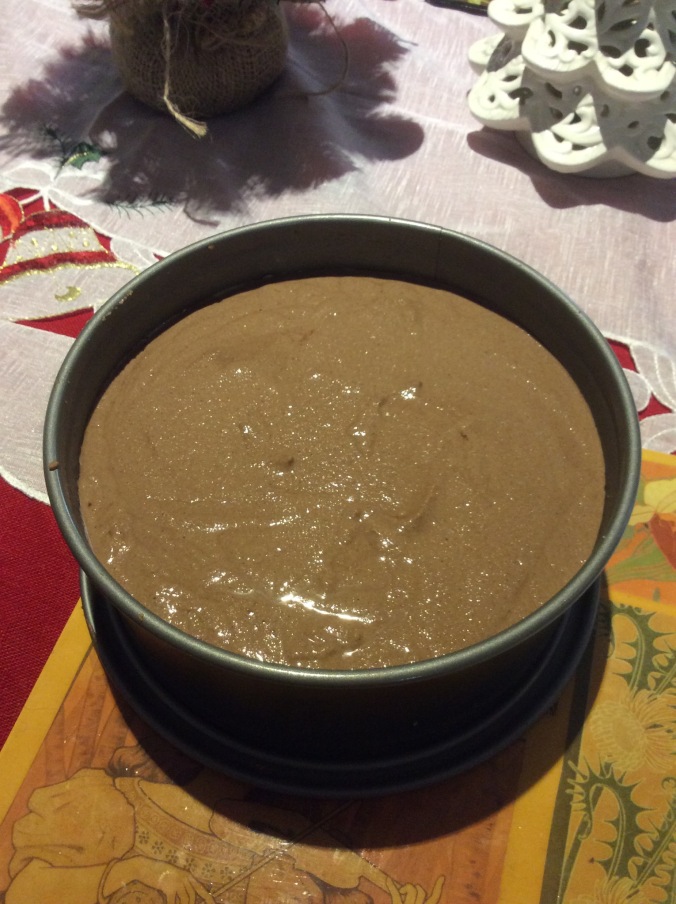 And finally the gingerbread…these are based on this recipe

With a bit of tweaking 🙂 honestly I can’t express how good they are! Gingerbread cookies are one of my favourite things at Christmas, and I was so surprised that a Paleo version could actually be BETTER than the grain and sugar filled one I had used for years before…but it was. And is.

M requested an afro on his. I used raw cacao nibs. 🙂

Well, considering I set this up as the Wolfberry Knits blog, there has been surprisingly little about knitting so far! That will no doubt change in the new year…I am working on a couple of patterns at the moment, here is a sneak peek of one….

And as this is also a Ravensridge blog of sorts, here’s a pic of what happened here this week…a massive (and I do mean MASSIVE) storm one evening wiped out a heap of trees, including this one, which took out one of the chook houses too. Fortunately the chooks remained unharmed. They escaped and came back later in the night. Unfortunately so did a python. But M managed to evict him before any harm was done, and the house has now been temporarily patched and snake proofed once more.

Poor old Vladimir. Rough night. (He’s a Transylvanian Naked Neck by the way, he’s meant to look like that.)

So 2015 is going to be a particularly fun year… 2 books to finish, many more patterns to publish, a million things to knit and crochet and so far two trips organised, one to Paris and one to Helsinki……very excited!! 🙂 have been working hard on my French and Finnish. I will also be spending some more time renovating/restoring my studio, a 40ft long antique train carriage. That’s an adventure in itself and will post about that in the near future. 🙂 Wishing everyone a very merry Christmas and a safe and happy New Year! 🙂 xo