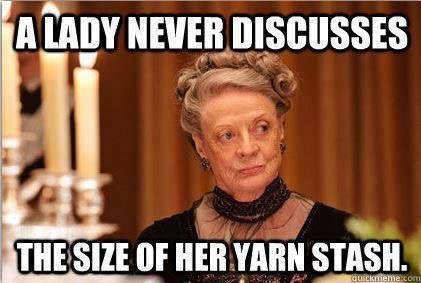 I described my yarn stash to someone this week as ‘obscene’, and it really got me thinking.
An ‘obscene yarn stash’. So a yarn stash that is basically abhorrent to morality. There’s some pretty strong emotion around a word like ‘obscene’.
There’s disgust and shame and guilt. I don’t recall feeling any of those emotions when I spoke the word though, so why on earth did I say it?
It was more that I should feel them, as if having a huge stash of yarn, or indeed lack of restraint regarding anything, is something to be embarrassed about. Amoral.
And I was thinking that’s really weird. It’s not like seven rhino horns on the coffee table or anything.

But how much is too much? And is too much yarn bad for you as a person? (To quote the well known line, “Of course too much of anything is bad for you. That’s what too much means!”)
So then I started thinking about the terms ‘collecting’ versus ‘hoarding’.

I have, now and again, been accused of hoarding by unkind people, and it never fails to irritate me. Which means, probably, that I am a hoarder.
I do officially collect some things. Coffee makers for one. I got them all out for a photo but it involved too much dusting. So instead, here’s some of my favourites.

Oil lamps, doilies, amethyst glass, vintage advertising…Yeah, basically old stuff.
Then it starts getting a little tenuous…knitting needles.
To put it clearly, they are just about almost on the brink of the threshold of out of control.
I like vintage needles. They’re pretty, they take up hardly any room, and they remind me of learning to knit as a child with my mum. Who could forget the tortoiseshell needles from the eighties? Or the anodised aluminium from the seventies?
I had good intentions. When I first moved my studio into the train, I got organised.

I was pretty impressed with myself for this effort. Except for the small detail that I don’t use these needles at all. Like, AT ALL. I don’t use straights. And also…that’s not all of them. There’s these as well. 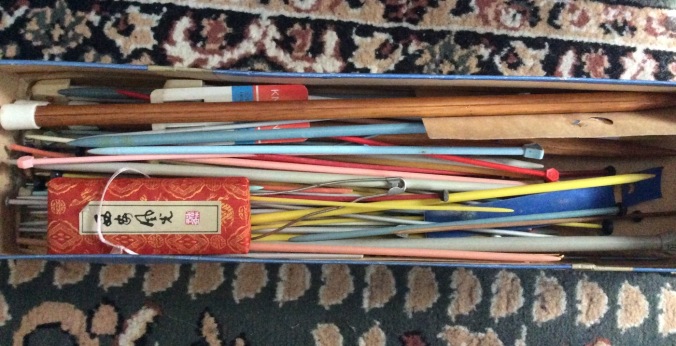 Um, let’s forget double points and circulars and the rest and just say that’s all of them.
When I started calling them a ‘collection’, it was interesting to me that somehow that completely justified it to other people.
‘Aaaah, she COLLECTS them….now I get it…’
‘Gee, what an impressive COLLECTION!’…..
Hehehe. Suckers. 🙂
Also, when you start saying you collect something, people start giving you stuff. Lots of stuff.

The yarn stash though is a completely different matter. It can’t really be called a yarn ‘collection’, any more than our pile of firewood can be called a ‘firewood collection’. There’s nothing special or vintage or unique about it, and I fully intend to use it all at some point. If I live long enough. Here is some that’s organised.

I’m not under pressure here, either. Discussing the ‘how much is too much’ predicament with M, he shrugged and said ‘There’s no such thing as too much yarn. You should get a shipping container and I’ll line the walls with pigeon holes for you.’ Me, in guilty voice: ‘But I already have a forty foot train.’ Him: ‘Nah, the train is for working, not for storing.’ ❤ that man.

Why oh why so much yarn, I ask myself? Am I preparing for armageddon? Self sufficiency and post-apocalyptic survival skills are all well and good, but realistically, if the shit hits the fan, I ain’t gonna be knitting. Seriously.
So then there’s the scarcity argument. You HAVE to get it now or it will be gone forever!! There will be a worldwide yarn and fleece shortage and you won’t be able to knit or spin unless you have a massive stash in backup! Generally, I dislike scarcity thinking. I am, for the most part, a ‘prosperity and abundance, positive thinking’ kind of girl. So it’s probably not that.
Much of the stash consists of bargains that just could not be gone past. A once in a lifetime sale!! A stocktake sale!! Any kind of sale!! Yep, there’s definitely some truth to this one. I love yarn sales. To quote my favourite line ever from Kath & Kim,
“I think I saved so much with what I spent, I actually made money.”
My train of thought tailed off somewhere around this point and I put on a Kath & Kim DVD and went happily back to my knitting. The angst, if there actually is any, can wait for another day. If I knit solely from my stash from this point on (haha), I only have to live to about 140. Which is apparently feasible. Doctors have already doubled the lifespan of the worm. So I’m just well prepared, really.